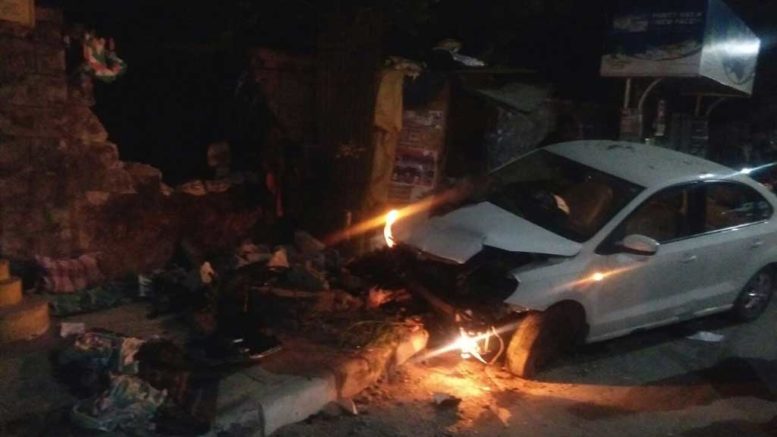 A college student, a girl from a prestigious engineering college was in a car accompanied by three other friends. She ran over a man sleeping on footpath in Kushaiguda. This falls in the limits of Rachakonda police limits, Hyderabad.

The deceased was a cobbler sleeping outside his shop and was crushed by the speeding vehicle. The 19-year gold was returning home after a party late night with her friends and she lost car control. She was in an inebriated state, said police. The car hit the footpath on the road another side, crossing the road divider.

K Ashok, 30 also sustained critical injuries, but he was rushed to the Gandhi Hospital, where he succumbed. This incident occurred in the DAE Colony after midnight. People who gathered on the sport alleged that police were shielding the students as the girl driving the Skoda car is a police officer’s daughter.

Police said they the case is registered and further investigations were being conducted. The CCTV footage was being scanned in that area.

The vehicle was at high speed that it ran over K Ashok the cobbler and crashed into the compound wall of DAE Colony. The bumper of the car and a tree fell on Ashok’s son Mahesh right leg. The impact of the high-speed collision was that the compound wall portion also collapsed. The engineering students were girls of Sreenidhi Institute of Science and Technology. They just got out of the car and were trying to flee.

However, locals came and surrounded them, besides the alerted police. The locals pulled from underneath the bumper, Mahesh.

CCTV footage, which was hazy had the crash captured. Ashok was rushed in an ambulance to Gandhi hospital, but he was brought dead. The girls were taken to the Kushaiguda police station.

“The woman claimed a dog in front of the car. To avoid the animal, she steered to left. In confusion, instead of the brake, she slammed resulting in the accident,” said the inspector. The CCTV footage did not show any dog.