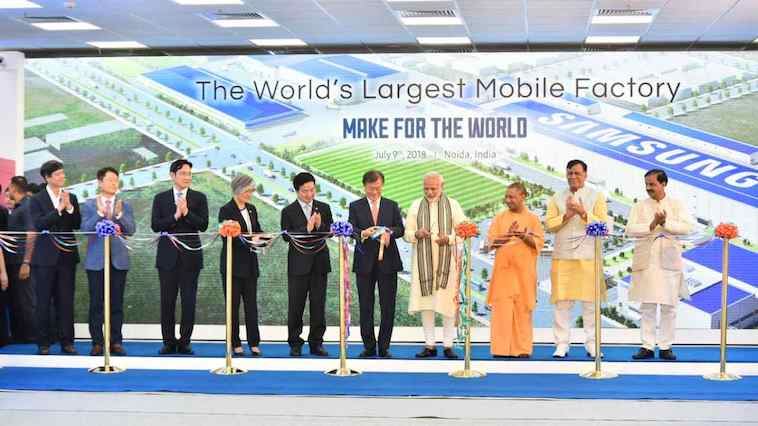 India proudly brags to have the world’s largest factory which makes mobile phones set up by Samsung at a 35 acre plot in Sector 81 Noida Uttar Pradesh. It has successfully been inaugurated by the Indian prime minister Narendra Modi and the South Korean President Moon Jae who landed together at a quickly-prepared helipad adjacent to the factory on Monday.

Samsung is currently making 67 million smartphones in India and with the new plant being functional, it is expected to manufacture nearly 120 million mobile phones. The expansion of the current facility will help reaching double productions in Samsung’s production capacity of consumer electronics like refrigerators and flat panel televisions and not just mobile phones. This step therefore further consolidates the company’s leadership in these segments.

According to Tarun Pathak, who is also the Associate Director at Counterpoint Research, has predicted that the new facility has given Samsung an advantage by reducing the time to market. Samsung already has two manufacturing plants – in Noida and in Sriperumbudur, Tamil Nadu – five R&D centres, and one design centre in Noida, employing over 70,000 people and expanding its network to over 1.5 lakh retail outlets.

Samsung India, has registered 27 percent growth in mobile business revenue for the financial year 2016-17 – accounting for a whopping Rs. 34,300 crores of its reported Rs. 50,000 crores sales. For Samsung, India is among the top five smartphone markets globally and is a big opportunity across price segments, including 2G feature phones.