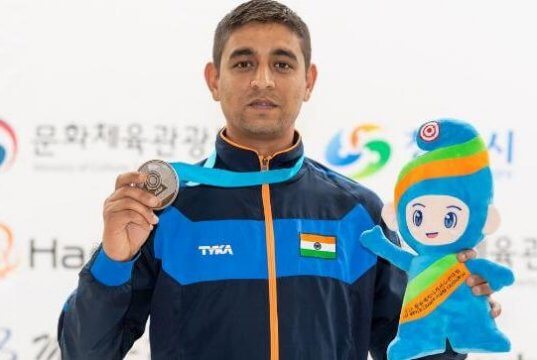 Shahzar Rizvi, showed his nerved in his first ISSF World Cup by clinching gold making a world record score on Saturday in the 10m air pistol men in Guadalajara, Mexico.

Rizvi, an Indian Air Force, sergeant, pipped Rio Olympics gold medallist, Christian Reitz of Germany and Rai, a teammate by scoring 242.3. In this run, he also broke a record of 241.8, a record of Japanese legend Tomoyuki Matsuda 241.8, that was created last year in October.

Mitharval, was another senior World Cup debutant who missed out on a medal, thereby finishing fourth with 198.4 scores.

Rizvi won the event at the national championships at Thiruvananthapuram with a new record, last December. He also said at that time he wanted to prove a point on Saturday.

“I have been getting the second position in the national ranking and was certain to be selected for the Commonwealth Games in April. But I was utterly shocked when I was not in the Games as per selector’s decision. I was annoyed and wished to prove it and show how good I can be, said Rizvi.

The NRAI, National Rifle Association of India has chosen Rai over Rizvi for the CWG, taking into consideration the experience of Rai. They had done this selection using their right without taking the national ranking into consideration. Only two shooters were permitted for an event and the other shooter in this category for CWG is Mitharval, a number one in India.

Rizvi, hails from a family of shooters, his three cousins being shotgun shooters. A sergeant with Indian Air Force, Rizvi acquires training under Ronak Pandit and is supported by Olympic Gold Quest.

In the final, the Indians came with a great start. After 10 shots, Rizvi (99.4 points) was behind Brazil’s Julio Almeida (101.8), while Rai and Mitharval were in the top five. While Rizvi displayed confidence, Rai was a little inconsistent.

Be the first to comment on "Shahzar Rizvi, Shooter Becomes World No.1 In 10m Air Pistol"