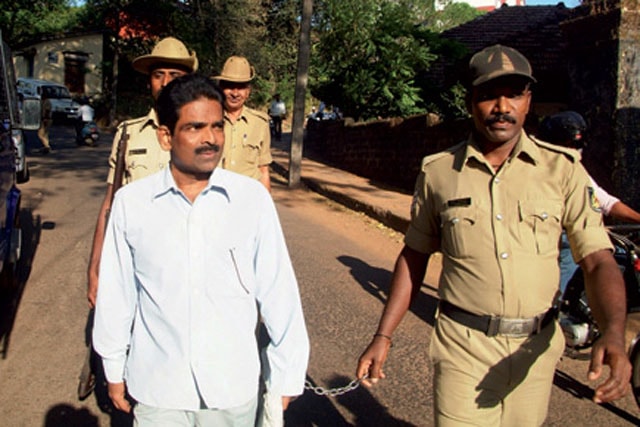 Southern Karnataka began fearing killings initiated in 2003 that spanned to around five districts for nearly six years. The victims were all women, they were cyanide poised and found in the bus stations restrooms with a rope hanging around their neck.

Cyanide Mohan was arrested finally and the police uncovered gory crimes in a series that he committed allegedly.

The 6th Additional District Sessions Court in Mangaluru on Friday convicted ‘Cyanide’ Mohan for rape, murder and robbery of a 28-year-old Bantwal woman in Dakshina Kannada. He was sentenced to life imprisonment.

This is the fifth case Cyanide Mohan was convicted and there many more cases pending.

In September 2009, Cyanide Mohan came at the Madanthyar bus stand and contacted Anita Barimar, the victim, introducing himself as Shashidhar Poojary. He got her friendly securing her mobile number and the small introduction took him to brief courtship and he proposed to marry her.

On 24 September, the same year, he took her to Hassan Ganesh Lodge and raped her. He gave her a pill saying it was a contraceptive, while he asked this lady to take the pill on reaching the Hassan bus stop. The woman died in the restroom in a few minutes, while he came back to Ganesh Lodge and went away stealing her jewelry. He also conveniently sold the same ornaments in Hassan to a jewelry merchant.

Although the bodies of women were found in and across the towns since 2003 in the five districts, the police failed to connect the killings. All were declared suicides, even though after the two victims autopsy showed cyanide traces in them.

Even in 2009, when body of Anita’s was found in the bus stop, the police did not suspect it to be a serial killers job. However, murder of Anita had become controversial as her parents said during the communal clashes she fled with a Muslim boy in Dakshina Kannada district. Members from Anita’s community – Bangera – carried out a protest and shouted to burn down the Bantwal Police Station.

The call records of Anita led to Madikeri, Puttur and Kasargod. These calls were to women who went missing. On analyzing the call records of these missing women, the police were certain they had got some sex trade racket into their trap and were about to bust. But, finally, they got from Deralakatte in Mangaluru, a boy Dhanush. As the police caught him, he revealed, Mohan Kumar, his uncle gave this phone to him.

The police found Mohan Kumar was in contact with a woman from Bantwal, named Sumithra Pujari. The police used Sumithra to catch Mohan. However, as he revealed during the cross-examination was worse than the police suspected. It was a serial killer not a flesh trade, they nabbed.

He disclosed he killed 32 women. Mohan would entice them making promises of marriage, rape them, call them to the nearest bus stand and ask them to gulp a birth control pill. The pill was mixed with cyanide. The women who went to the restrooms would become sick on taking the pill.

All these women were dead in their wedding sarees. The jewellery they bought was stolen by Mohan. Thus, Mohan Kumar was branded as‘Cyanide’ Mohan.

Be the first to comment on "Cyanide Mohan, a Serial Killer Convicted by Karnataka Court for Life Term"