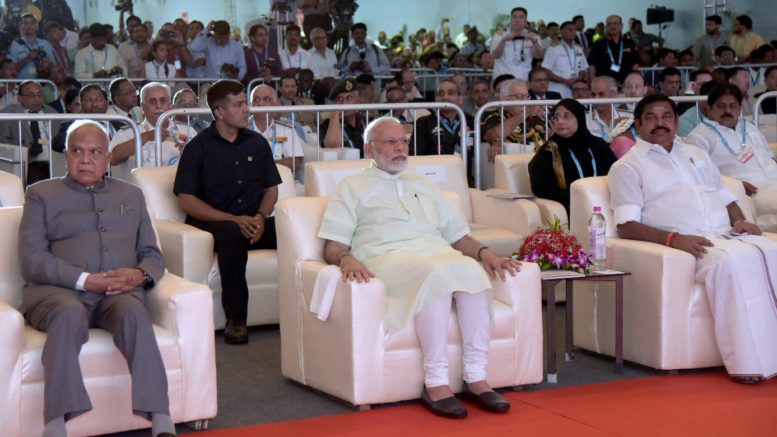 A lot of protests by political parties in Chennai over the Cauvery issue continues and on the other hand, all the police personnel are cordoning off Thiruvidanthai in Kanchipuram district as Prime Minister Narendra Modi is about to visit the city to inaugurate the Defence Expo-2018. The police have suspected various political parties waving black flags against the PM, hence, 5000 police personnel have been deployed in the city at the venue of the expo.

Three-tier security has been arranged at the airport where special action force and the special task force have been assigned the duties. As per the sources, Mr Modi will arrive in Chennai city around 9.25AM and will board a chopper to Mamallapuram and then by road to the venue. Later he will reach IIT-M and will visit Adyar Cancer Institute. In addition, India Coast Guard and Coastal Security Group CID official have been deployed to monitor the state coast.

The opposition is ready with black flags

The opposition parties are on toes to throw their rage on the PM and will raise black flags as soon as he enters the city. They are furious over the delay of the centre over the Cauvery Management Board where the deadline was given by the Supreme Court already passed on February 16th.

The decision to raise black flags was taken at an emergency meeting at the DMK executive committee meeting. The party has also asked the residents to put black flags on their houses and wear black t-shirts in showing their anger towards Mr Modi. Even the top Kollywood stars are expected to join the protest.