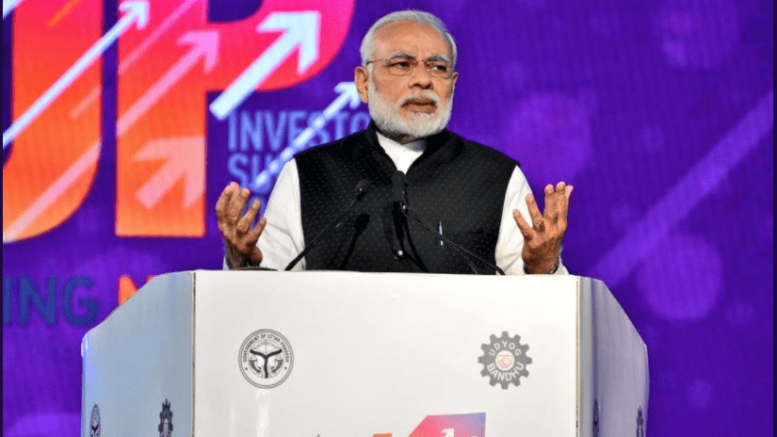 Prime Minister Narendra Modi announced on Wednesday in Lucknow that the Union Budget proposed two defense industrial corridors and one would be in UP.

Speaking at the UP Investors’ Summit inaugural session, he said that in UP the defense industrial corridor would pass through Agra, Aligarh, Lucknow, Kanpur, Jhansi and Chitrakoot. “This will be an investment of Rs 20,000 crore and is expected to generate 2.5 lakh jobs. The proposed Bundelkhand and Purvanchal expressway will also receive a good boost to industrial development in the state,” he said.

The Prime Minister showered his appreciation on chief minister Yogi Adityanath, the bureaucracy and his ministerial colleagues, for bringing Uttar Pradesh in a period of 11 months on to development road.

He said, “When change begins, it becomes apparent in every sphere. The presence of investors at this summit reveals that the change has begun taking place and Yogi Adityanath has certainly brought and instilled new hope”.

Mr. Modi said a new Uttar Pradesh was coming into shape and he would make his possible best contribution.

A saying is that ‘Kos kos par badle paani, char kos par Vani’ explaining the diversity of India. In UP, this saying is more appropriate, because every district reveals a different and unique identity. If the chikan work is prominent in Lucknow, the mango of Malihabad is popular worldwide. You have Bhadohi renowned for carpets, Varanasi for it excellence in ‘zari’ work and Ferozabad specialty for its glassware. There is the Subah-e-Banaras’ and ‘Shame Avadh’. Then we have Ganga, Yamuna, and Saryu. There are also the BHU and the IIT, the land of Ram and Krishna as well as the Taj Mahal,” said Mr. Modi.

The Prime Minister assured that this diversity will be employed to the advantage in the scheme as “one district, one product” and that will ascertain holistic development. “Now time is devoted for value-addition in every sphere and I am happy for Yogi Adityanath and his work dedication. The human interface reduction and increased emphasis on digital permissions increase the ease of doing business in UP,” he said.

The Prime Minister also pointed out the fact that the young working age group will surely assist in taking Uttar Pradesh to greater heights.

Be the first to comment on "PM Modi’s Government Proposes 20,000 Crore For Two Defence Industrial Corridors in UP"