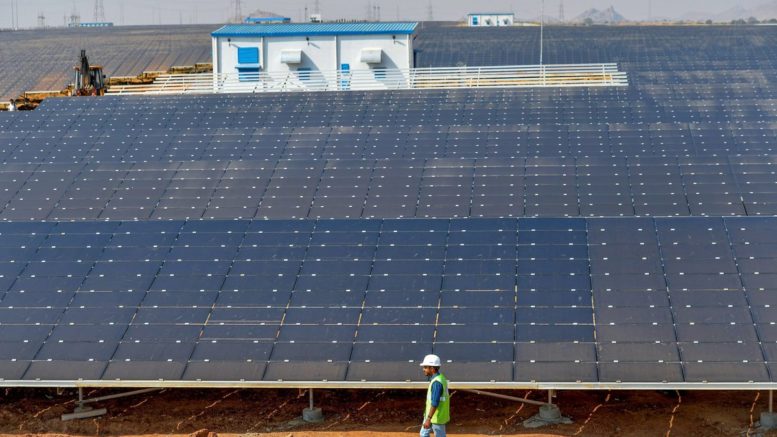 Shakti Sthala is the largest solar park in the world featuring a 2000MW capacity with a Rs.16,500 crore investment in the Tumakuru district at Pavagada in the state of Karnataka.

On Thursday, the Karnataka government inaugurated a 2,000 megawatts (MW), the first phase of solar park about 180km from Bengaluru in the Pavagada region of Tumkur district, that is drought-prone.

The solar project is said to be the largest in the world, spreading more than 13,000 acres and covering five villages. It is a part of the “Karnataka Solar Policy 2014-2021” that is aiming to decrease traditional power sources dependence and to move environmentally friendly on meeting the state growing power needs.

The solar park is an integral part of Siddaramaiah-led Congress government’s “Nava Karnataka Nirmana”. It is used by the party extensively in the run-up to the 2018 assembly elections so that it can highlight its economic development and the efforts of job creation, thereby attract big ticket and the state high investment projects.

The park ties to generate solar power by 100 gigawatts (GW) by 2020.
The solar park land is taken by the government on 25 year lease from approximately 2,300 farmers and they are paid in return per acre Rs. 21,000 as annual rent, specifying a scope of increase of 5% once in every two years.

This move was taken to seize the people migrating from this drought-hit region. Siddaramaiah on Thursday said ‘Development and economic growth occurs only when people become a part of the development progresses.

The development of the park was started in March 2015 as a joint venture between Solar Energy Corp. of India and Karnataka Renewable Energy Development Ltd.