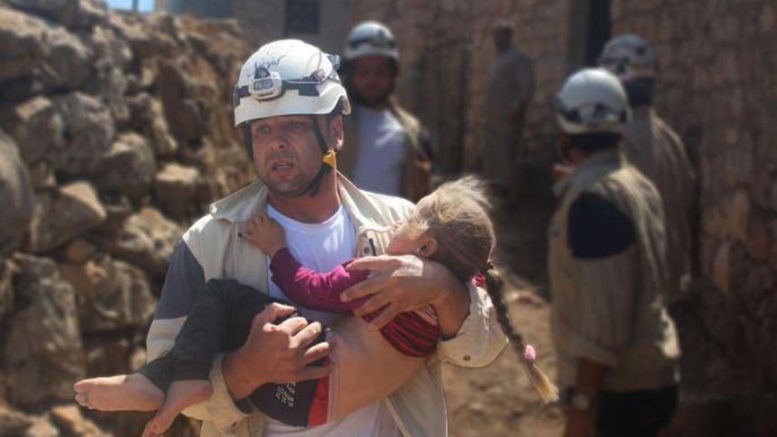 Syrians in thousands were sheltering yesterday in makeshift bunkers and many hundreds were killed in the government ‘. Nearly 300 people died in eastern Ghouta in the past three day, said the British-based Syrian observatory for Human Right war monitor.

Many planes near Damascus over the suburb appeared to be Russian, the military force part sent by Vladimir Putin, the Russia President to prop up Bashar Assad, the Syrian President, added the organization.

Yesterday Bilal Abu Salah, 22, a besieged resident whose wife is pregnant five months with their first child, said: “We are waiting our turn to die.

“Nearly all people live in shelters now. There are only five or six families in one home. There are no markets or food.”

He portrayed this horrifying situation as the civilians are slaughtered to fulfill military or political objectives”.

The Red Cross International Committee called for humanitarian access and warned that the worse is to come.

Marianne Gasser, its delegation head in Syria, , said: “The fighting appears to cause more suffering in the days and weeks ahead. This has to stop and this is nothing but total madness.”

Some people received treatment, while some are waiting wounded at a makeshift hospital to receive treatment.

The Union of Medical Care and Relief Organizations accused Assad’s Russian-backed forces for setting free in 48 hours plus 127 air strikes and countless mortar and artillery strikes, besides illegal barrel bombs dropped from helicopters.

Birmingham GP Dr Ghanem Tayara, the chairman, said: “There are unknown civilians in huge numbers trapped under the demolished buildings rubbles. Thousands of civilians, mostly children and women, have sought shelter in badly equipped underground shelters with no or little clean water or food stocks.

The Ghouta streets are apocalyptic and it is a great cowardice to attack civilians, hospitals and schools.

Vladimir Putin has called in Syria for a temporary daily ceasefire, as evidence emerges that the regime may be soon using chemical weapons. The Russia President is fighting in the eastern Ghouta enclave and now there are over 393,000 civilians trapped.

From 9am to 2pm, the ceasefire is accompanied by the creation of a “humanitarian corridor” allowing civilians to desert the rebel-held area that has been under intense bombardment by Syrian government forces.

Russia accused of impediment on Saturday’s UN Security Council vote, thereby calling for a 30-day ceasefire, but the intervention of Putin could force President Bashar al-Assad to retract his troops.

This comes amid blames that the force of Assad’s used in Ghouta chemical weapons, based on the survivor’s reports that were suffering the symptoms of chlorine gas and were admitted to hospital.

The Syrian regime is repeatedly denying using chemical weapons, even though it is accused of numerous attacks dating back to 2013, when near Damascus a nerve gas attack killed over 1,000 people.

Barack Obama, former US president said at the time the chemical weapons use would be a “red line” and it would lead to US military into action against the regime.

However, he did not back it with action, and though Assad signed an international treaty in 2013  outlawing the use of chemical weapons and surrendered his stockpile, it is now strongly believed that assertions of their use has continued.

The Russian government has turned the war tide in Assad’s favor, and is repeatedly accusing the regime’s opponents of using “toxic substances” thereby is framing the regime for war crime, as reports Russian news agency Tass .

Yesterday, Sergei Lavrov, the Russian Foreign Minister repeated, telling reporters that accusations of chlorine attack were a “trick” prior to attacking the White Helmets relief organization for promoting that he says as “fake stories”.

However, Assad’s alleged use of weapons again calls into question the pact effectiveness of getting rid of chemical weapons.

Both Putin and Assad are acting with impunity.  Regardless of whether the attacks are conventional, it should be stopped as a peace deal is now a question and if they will be punished says, in The Atlantic, Calamur.  And with chemical attacks, there is no accountability and there is no evidence of any such war that has been through chemical warfare has ever ended in international chemical warfare prosecution.