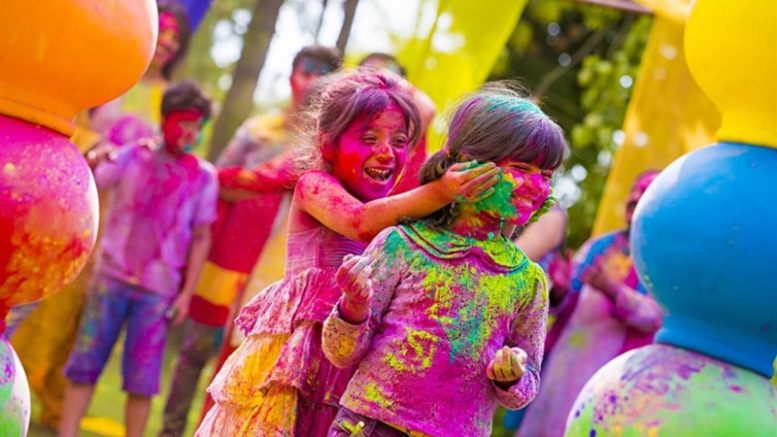 Holi is synonym to bhang and rang for any Indian. This festival of colors is related to social, cultural and biological characters and has mythological significance, than merely pleasing the eyes. Holi is referred as festival of colors. It is celebrated in the Phalguna month on the full moon day that falls between Feb-March. Like all other festivals, Holi in India has represents victory over evil. Water and colors are thrown and in association is loud music and drums.

There is a legend relating the initiation of Holi. Hiranyakashipu, the king in ancient India was almost a demon. He wished to take revenge for the death of his younger brother by killing Lord Vishnu. The king prayed and acquired a boon that he saw himself as God.

The cruel kind had a son, Prahalad, a Lord Vishnu’s devotee. His father, the kind disliked his son worshipping Lord Vishnu and planned to kill his son as his son denied worshipping his father, the king.  The cunning king asked ‘Holika’, his sister to sit on pyre of fire as she was fire-immune with Prahalad on her lap and the aim was to burn his son. But his son started chanting Lord Vishnu’s name and so Holika got burnt, while Prahalad was safe. Later, Lord Vishnu killed the king Hiranyakashipu.

The death of Holika is connected to Holi festival. In states such as Bihar, a bonfire is lit before the Holi day evening in remembrance of the evils death.

The colours became a significant part as it dates to Lord Krishna, another Lord Vishnu’s reincarnation to play Holi with his friends at Gokul and Vrindavan. They played pranks and made it an event. It is also a spring festival saying bye to winters that it is associated in some parts of India with spring harvest and the new crops are a part of happiness.

How is it celebrated?

Holi is a Hindu festival and is also mentioned in the religious books. Even ancient temples have Holi sculptures on walls.  Earlier Holi colours were from ‘tesu’ or ‘palash’ tree flowers and were referred to as gulal. These colours were good for skin and had no inclusion of chemicals. But now the colours definition has changed. Today people use harsh colours having a combination of chemicals. In fact, even fast colours are used.

The Holi celebrations are not actually a one day festival, but it is for three days such as:

Day 1: This day is ‘Holi Purnima’. On the full moon day, coloured powder and water are kept ready on a plate in small brass pots. This begins with the male eldest member sprinkling colour on his family members.

Day 2:  The second day is referred to as Puno. On this day, the images of Holika are burnt by lighting bonfires and the story of Prahalad and Holika is remembered and also narrated to small kids. Mothers take their babies around the bon-fire in clockwise direction seeking the Fire God blessings.

Day 3: This is a very special day referred to as ‘Parva’ and is the final day for Holi celebration. The water and the coloured powder is mixed and smeared on each other. Lord Krishna and Radha deities are worshipped while smearing each other with colours. It is a day of fun and music.

Be the first to comment on "Why is Holi Celebrated and What is Its Significance ?"