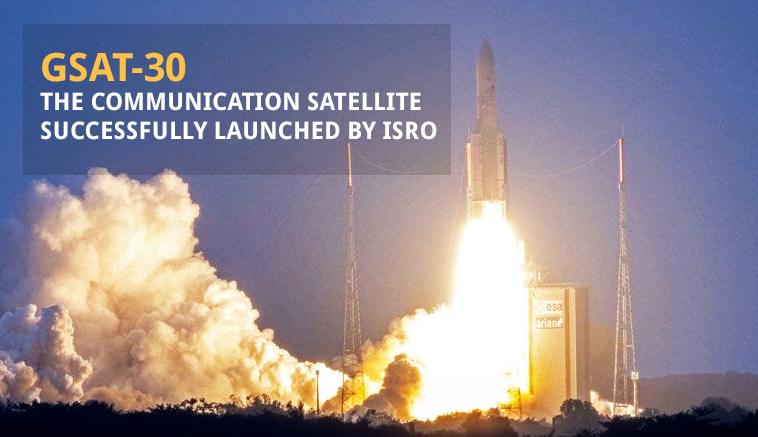 GSAT-30, a high-power communication satellite, was successfully launched from onboard Ariane-5 flight from the Guiana Space Centre at the Kourou launch base in French Guiana today. The European Rocket Arianespace launched two satellites and they are GSAT-30 for the Indian Space Research Organization (ISRO) and the Eutelsat Konnect satellite for the French telecommunications company, Eutelsat.

Both these satellites were placed at approximately 22,000 miles (36,000 kilometers) above Earth’s surface. Eutelsat’s satellite will offer broadband data and internet services of up to 100 megabits per second (Mbps) for 40 countries in Africa and 15 countries in Europe.

GSAT-30 was placed in a geostationary orbit at 2:35 AM and will be replacing the ageing INSAT-4A satellite, which was launched in 2005. This communication satellite is equipped with 12 C and 12 Ku band transponders. The satellite provides Indian mainland and island coverage in the Ku band. In contrast, the C band covers Gulf countries, a large number of Asian countries and Australia.

GSAT-30 has a mission life of 15 years and offers high-quality DTH, television uplink and VSAT services. The communication payload of this satellite is specifically designed and optimized to maximize the number of transponders on the spacecraft bus. It is also used for bulk data transfer for a host of emerging telecommunication applications.

Uses of the Communication Satellite

Be the first to comment on "GSAT-30: ISRO successfully launches the high power communication satellite"