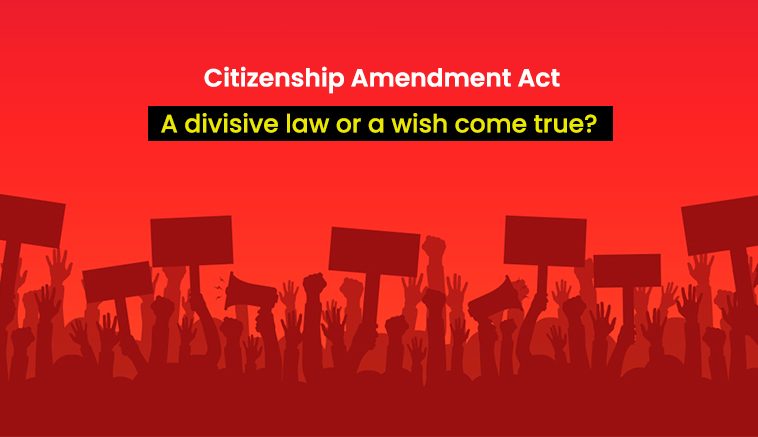 Citizenship Amendment Act: Is it a divisive law or a wish come true?

What does the Citizenship Amendment Act say? The non-Muslim refugees from Pakistan, Bangladesh and Afghanistan will be given Indian citizenship according to the act. It has come into force from January 10, 2020.  According to the CAA, migrants from communities other than Muslims from Pakistan, Bangladesh and Afghanistan who have stayed in India for five years and made an illegal entry in India on or before December 31, 2014, can apply for citizenship.

It excludes Muslim migrants, thereby violating Article 14 of the constitution. Article 14 talks of equal rights. But the government says the CAA passes the test of “reasonable classification” applicable to Article 14.

Why the opposition to CAA?

Due to the amendment of this act, there have been widespread protests against the law in different parts of the country. According to those who are opposed to this law, this is not right as the law grants citizenship based on religion. And this violates the basic principles of the Indian constitution.

The new citizenship law has earned many protestors across the nation. Amid protests in the country, Congress-led opposition meet begins on CAA.

The Indian Prime Minister Modi said it is important for the youth to know why CAA is important as many rumors are going around. He added that they did not make a law on giving citizenship overnight.

He said, “CAA has nothing to do with snatching away anyone’s citizenship rights. It is a law to give citizenship to persecuted minorities.” He uttered these words while speaking at a rally in Belur Math on the outskirts of Kolkata.

Be the first to comment on "Citizenship Amendment Act (CAA) – What does it say?"