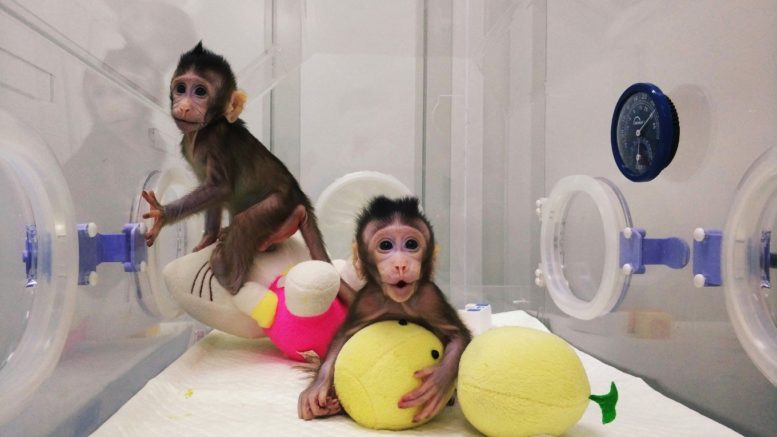 Zhong Zhong and Hua Hua are the two identical Monkey clones in the Chinese laboratory, which were born a few weeks earlier. The scientists there say that Monkeys those are genetically identical will be very useful in the experiments for various human diseases including cancer and immune disorders.

This may or may not be a stepping-stone for further researches but critics have a take that this kind of work will raise ethical issues, which will bring the world near to human cloning. Very little, we know about these researchers and the impact of these on the society.

The clones are being bottle-fed and are growing under normal conditions. Zhong Zhong is eight weeks old and Hua Hua was born just before six weeks.

Objections from many scientists

The work has been under criticism by different scientists all over the world. Prof. Robin Lovell-Badge from London said that the procedure adopted to create these clones are inefficient and hazardous and Prof. Darren Griffin from the University of Kent said that the research may be used to study human diseases but it surely has ethical issues that cannot be neglected.

Further, it is being said that ethical considerations are very necessary when these types of experiments are being carried on. 20 years back a sheep named Dolly was cloned from an adult cell and since then many mammals have been cloned using the somatic cell nuclear transfer technique (SCNT). The procedure involves transferring the DNA from the nucleus of a cell to the donated egg cell whose DNA has been removed. Then egg develops into an embryo and is implanted into a surrogate animal.

Zhong Zhong and Hua Hua are the first human primates cloned using this technique. The researchers said that these two cloned Monkeys were a successful result after 79 failed attempts and they said that all the procedures have been carried out under the strict scientific standards set by US National Institute of health.