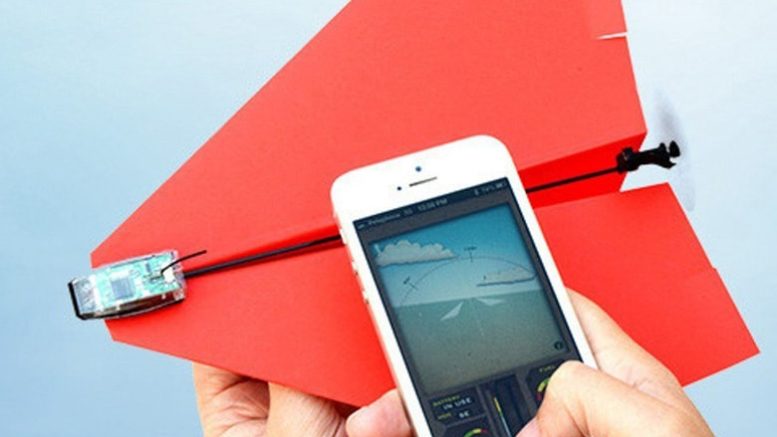 Toys are no longer toys, the latest phone controlled paper plane out in the market with affordable price. Few years before, in 2014, PowerUp has first previewed the smartphone-controlled paper airplane, but the actual day has come wherein it is actually available in the market to everyone. One can enjoy operating the paper planes with the remote in their hands.  The announcement made by a startup in February is becoming the latest news in the market, in which it unrevealed the retail version of the Dart aircraft into the market. As soon as its announcement, it is experiencing a high demand with its pre-order campaign for standard (which include wheels and Japanese aerobatic papers) and barebones (the propeller module and two templates) kits starting at $37 and $29 respectively. People who like aeronautics, need not restrict themselves to the above-mentioned models, rather they can also avail additional modules and stands at higher priced packs.

The wait is no longer, as reported, these kits will be arriving in this month, with some exceptions for few. This exceptional (which may include standard solo kits) are expected in May.

Working of the Paper Planes :

These Darts, which can be steered with an app, are simple gliders that can be operated with the control in our hands. . These are revolutionizing the paper planes into a powered aircraft. When compared with a model aircraft, these are less expensive and also, with the help of these the user need not confined to the fixed style of the aircraft, rather it will provide the user to fold the aircraft as per his or her convenience. Just like slow and steady wins the race, it offers a slow but steady distance champ. The amazing feature is its remote-controlled machine which can be customized. The user can enjoy all these various features at a very affordable price.