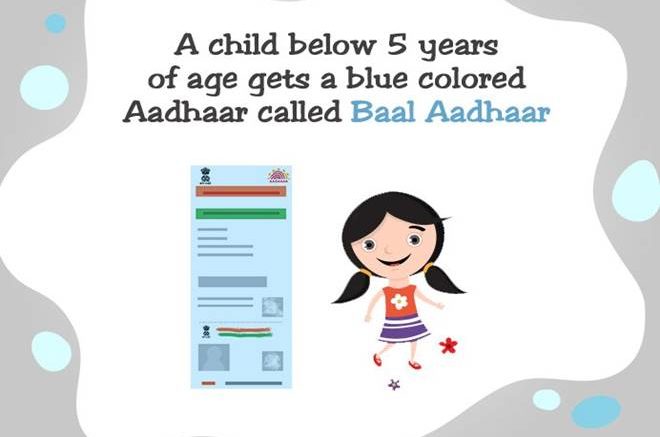 UIDAI (the Unique Identification Authority of India) has announced on Monday through tweets in a series as it official handles that there is no need for biometric details required to get Baal Aadhaar.

UIDAI introduced a ‘Baal Aadhaar’ card on Monday. Thisis in blue color and the card will be given to children below five years age. To get a Baal Aadhaar, there is no need for biometric details. UIDAI also announced this through official tweets. “A child below 5 years gets a blue colored Aadhaar known as Baal Aadhaar. However, when the child becomes 5 yr old, there is a need for a mandatory biometric update,” it said.

Parents can take their children to any Aadhaar center nearby. Also remember to update the Aadhaar data biometric of your child at 5 years age and again at 15 years. This biometric update is now mandatory and free for children, said UIDAI in a tweet.  Even the school ID that is issued by the educational recognized institution can be used for the enrolment of Aadhaar is informed.

UIDAI, along with these tweets, attached a few infographics displaying a blue-colored Aadhaar card. Actually, right now it is not mandatory for children of this age to avail an Aadhaar card, but it is required for attending educational programs overseas and also to avail other government scholarships.

The updating process of the Baal Aadhaar cards will be similar to that of a normal Aadhaar. It will require a 10 fingers biometrics, iris and facial photograph. The same process will be repeated as the child turns 15.

Meanwhile, the debate on linking Aadhaar card to various services seems now to be interesting. The Supreme Court had rejected recently a plea to extend the Aadhaar linking deadline to a host of services, including mobile services and banking. The deadline to link Aadhaar card has been fixed to March 31 by the government.

Be the first to comment on "Baal Aadhaar, in Blue Color for Children Under Age 5"