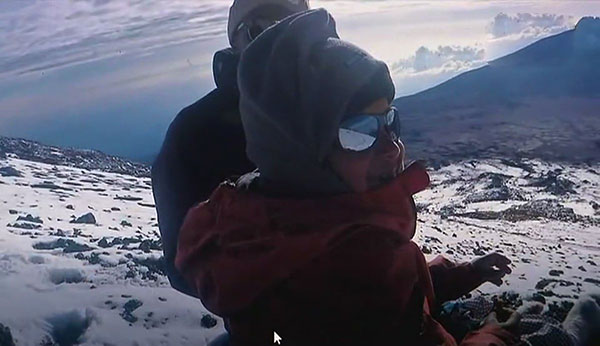 Times when parents run around their children trying to protect them in all ways from danger also has parents who allow Samanyu Pothuraju, with his coach to unfurl the Tricolor on April 2 at 5895 m height above sea level.

This trek in Tanzania to Mount Kilimanjaro was in Africa the highest peak and the trek started on 29 March from the base point and took five days to reach the peak.

The boy said ‘It was rainy and the road had stones. I was afraid, leg pained, but with little rest in between I completed it. I went to Mt. Kilimanjaro as I like snow very much. My favourite hero is Pawan Kalyan and my mom assured me she will make him meet Pawan Kalyan if the boy tries the world record’. He also said he is waiting to go next month to Australia and wishes to make a record.

Pothuraju’s mother also said “I am very happy really that my son tried to get a world record. After reaching there, I had to stop halfway as my health condition was not good”. She felt sorry for not accompanying her so but was very glad that her son did not quit reaching his destination. She said she felt worried and tensed as the climatic conditions were changing and were completely different. She was a proud mother now and was now focusing the next target in Australia to reach 10 peaks by May end and to make a record.