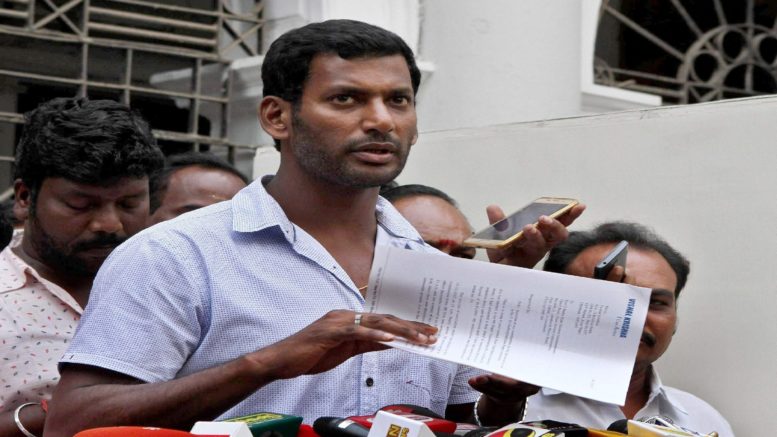 TFPC, The Tamil Nadu Film Producers Council strike is called off pm Tuesday. It was called off after the meeting with TN government ministers Kadambur Raju and K.C. Veeramani, Theater Exhibitors Association, distributors.

The Tamil film industry had shut down work for 48 days and after the call off is set to resume work. After 8 hours, on Tuesday, the tripartite talks between Digital service providers and exhibitors with TFPC, mediated by TN government came to an end and had a positive outcome.

TFPC President, Vishal said, the government has promised to set up a ticketing computerized system across the state in all theatres from June 1. There will be flexible ticket pricing and be depending on the movies budget the rates will be determined. The E-cinema has brought down to Rs. 5000 from Rs. 9000. Another meeting will be with the DSPs to determine for D- Cinema on the VPF cost, he said.

Vishal also said the TFPC will set online ticketing platform and this will surely bring the online ticket booking charges to the extent that it will just be Rs.4 from the charges of Rs. 30 per ticket charges that are existing now. There will be a mastering unit also set up and this long 48 days strike was called off on Tuesday offering a great relief.

Vishal said after the discussion that resuming on film shoots and the new Tamil films release discussion will be done with members. The Kollywood strike as per industry grapevine has slashed by half their VPF rates and the film tickets across TN will go computerized from June 1.

Today, Wednesday, Vishal will be announcing the new Tamil film releases status and the films are likely to release from this Friday, he said.The shutdown of Kollywood industry resulted in Rs 10-15 crore loss a day. It has affected the summer season and postponed Rajinikanth’s Kaala movie release, which is rumored now to release in June.

Be the first to comment on "TFPC Strike Called Off Announced Vishal, The TFPC President"