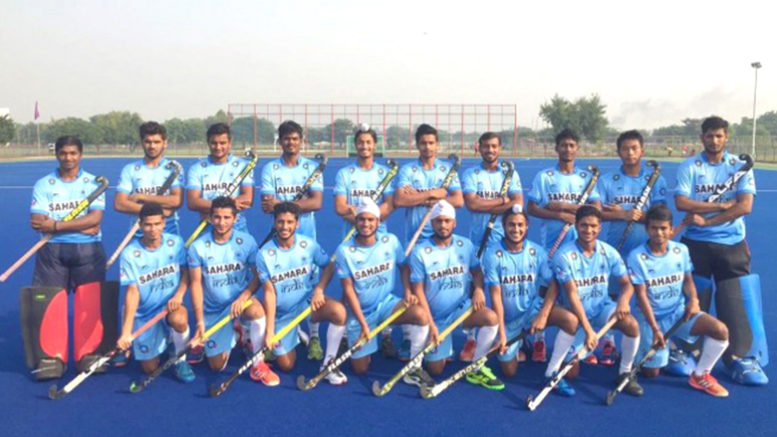 The Indian junior men’s hockey team scored 20 goals against the USA in Sultan of Johor Cup 2017 in Johor Bahru, Malaysia on Wednesday. Indian team won the match in a one-sided contest and registered their third successive win of the Sultan Of Johor Cup 2017. By registering three consecutive victories in the ongoing competition, now the Indian Hockey team stands at the top of the league table with a goal difference of 24.

Four Indian hockey players – Vishal Antil, Dipreet Singh, Harmanjit Singh and Abhishekscored a hat-trick each. Harmanjit is the star of the evening as he scored a record-shattering 5 goals in the match. Abhishek scored four goals while Dipreet and Vishal sounded the broad thrice. Maninder Singh struck twice and Rabichandra Morirangthem, Shulanand Lakra, Pratap Lakra, and Vivek Prasad scored a goal each. From India, there were ten different goal scorers but their opponents the USA failed to score even once, surrendered to a shameful defeat.

So far, Indian team is rampant in the tournament by winningthe competition opener Japan 3-2 and cruised past Malaysia 2-1 in the following game of the 7th Sultan of Johor Cup. While United states of America has been dreadful in the competition so far. It is because they have sufferedanembarrassing 19-0 defeat against Australia. Now, the USA sits at the bottom of the score table along with the goal deficit of 52.

Indian junior hockey team has already won 2016 Men’s Hockey Junior World Cup and now they will test against the unstoppable Australia on Thursday. The Indian team will play their last league game against Great Britain on Saturday after Australia. In 2015, India participated in the Sultan of Johor Cup lastly and they finished the competition as the runners-up.

Be the first to comment on "Sultan Of Johor Cup: India Junior Hockey Team Smashed USA By Scoring 20 Goals"