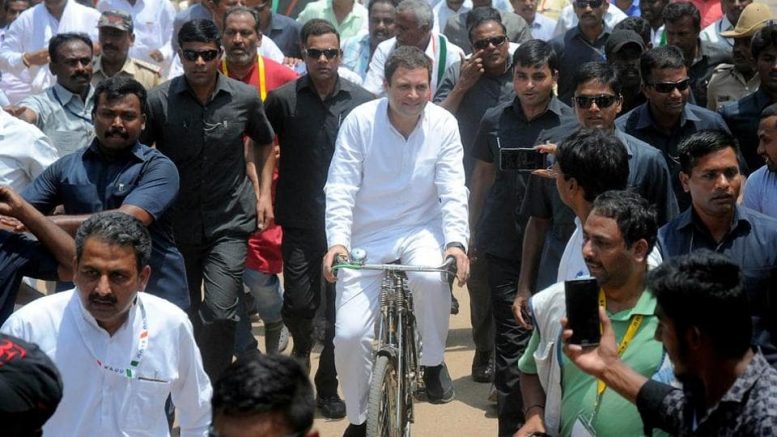 It turned out to be quite unbelievable but the congress president, Mr. Rahul Gandhi took a cardboard cylinder in his hands, rode a bicycle and went into the gullies to connect to his local voters, in Malur.

The roadshow was conducted in the areas of Malur, Hoskote, Doddaballapur and Devanhali on Monday. He was received with pleasing eyes when he landed his chopper at Malur and he was too happy amidst the crowd of the town. Rahul was happy to witness a large flank of crowd on both sides on his entourage in the roads.

People were surprised to see him walking out of his vehicle and then suddenly a bicycle was brought to him. Some of the ladies were carrying cardboard gas cylinders on their head that carried the crossed out pictures of Narendra Modi to protest again the fuel price hike, Rahul too held one of the cylinders on his head.

He climbed up the vehicle to speak to the crowd but changed his mind and entered a lane where a bullock cart was painted in tricolour. He climbed the bullock cart and delivered his speech. His speech was full of tirades against Modi, and BJP. His speech continued to protest against the hike in fuel prices, corrupt and tainted candidates and so on.

When Rahul entered Hoskote, he was showered with flower petals and received a warm welcome from the community as a whole. The crowd cheered him and he continued to attach BJP. He later spoke about the developments for the poor his government will do if he comes in power in 2019.

Overall, it was a hit show at Karnataka.

Be the first to comment on "Rahul Gandhi rides bicycle, walks into gullies to woo voters"