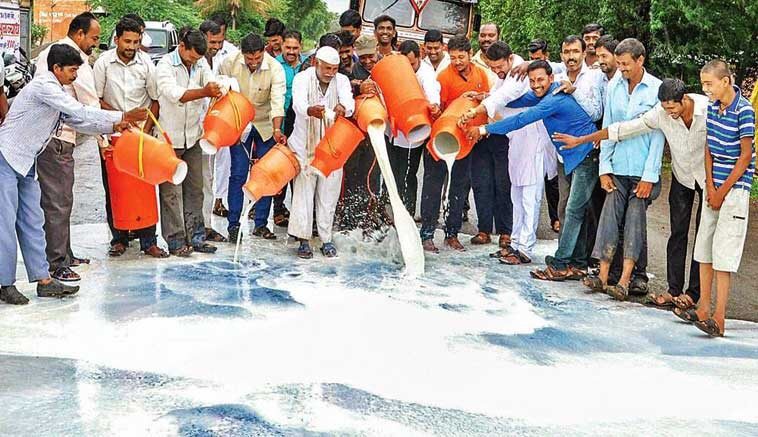 IN NAGPUR Milk farmers, who were on a state wide strike since Monday, finished their dissent late on Thursday after the Maharashtra government declared that farmers would be paid Rs 25 a litre for milk from July 21.

The conclusion to the strike was declared by Swabhimani Shetkari Sanghatna pioneer Raju Shetti and Chief Minister Devendra Fadnavis after their gathering.

“We respect the choice on milk costs… we cancel the mix,” Shetti said

Prior, Dairy Development Minister Mahadev Jankar declared the administration choice to build milk costs for farmers. He said the helpful and private milk creating/handling bodies have given their agreement to the choice. Jankar made the declaration after the Speaker gathered a gathering in his chamber where Chief Minister Devendra Fadnavis, Revenue Minister Chandrakant Patil, Leader of the Opposition in the Assembly Radhakrishna Vikhe-Patil, NCP pioneer Ajit Pawar and different pioneers and agents of drain providers’ alliance were available.

Milk supply had been influenced in a few sections of the state after Shetti drove dissents by ranchers. The Sanghatana was requesting higher costs for price and direct exchange of the appropriation of Rs 5 a liter into the records of Milk farmers.

On July 10, the state government had reported that milk powder and milk would be get motivating force sponsorships of Rs 50 (per kilo) and Rs 5 (per liter).

Clearly alluding to that choice, Jankar included, “Those milk powder makers who profit the endowment of Rs 5 a liter won’t get the motivator sponsorship for send out.”

Be the first to comment on "Milk Strike Called Off After Maharashtra Government Raises Price To Rs.25"