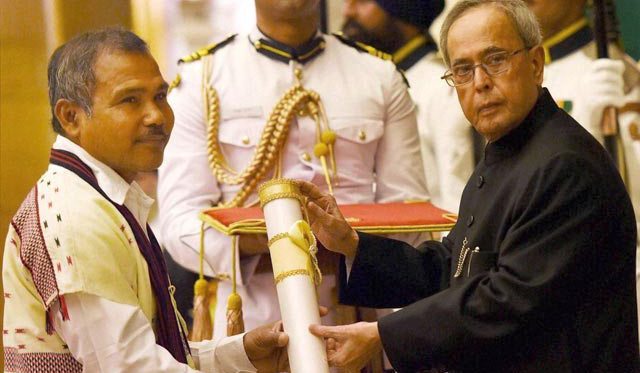 Man planting seeds in a barren land from last 37 years

Hard to believe but a teenager Jadav ‘Molai’ Payeng took an oath to give back something to nature
and hence he started planting seeds in a barren land some 37 years ago and today the place is new
lush forest eco-system. Payeng wanted to create a refuge for wildlife and with his unwithered
determination; he could achieve his target in last 37 years.
He began burying seeds along a barren sandbar near to his birthplace in the Assam region and he
decided to stay there only so that he could dedicate his life for the making of this forest.
Unbelievably, the place is host to a sprawling 1360 acres of forest that Payeng alone has planted. In
1979, when a flood washed away all the reptiles on the sandbar and Payeng while having a walk in
the area came across the dead reptiles; this became the turning point of his life and he decided to
turn the sandbar into a lush wildlife habitat.
He approached the forest department but no one helped and he started all alone. It took long years
for Payeng’s work to be recognized internationally but the wildlife started taking the benefit of the
man-made forest very soon. Due to the knowledge of the ecological balance, Payeng transplanted
ants to his eco-system to maintain the balance within. The forest is now known as ‘Molai’ woods and
now is a safe haven for endangered species like deer, tiger, rhinos, birds and elephants.
Payeng’s work came into the eye of the forest department in the year 2008 and then they
recognized the valuable work of Payeng. The person has given the next generation a lesson and a
new path to follow.

Be the first to comment on "Every New Day, a new plant to grow and gradually the place is turned in to a lush green jungle"