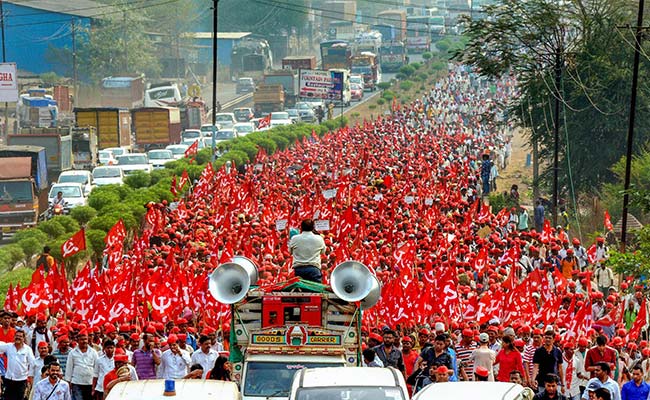 Mumbai at the ‘Kisan long march’ end witnessed over 30,000 farmers and tribals and they called off on Monday their stir after Devendra Fadnavis, Maharashtra chief minister assured clearing all the pending claims within six months time under the Forest Rights Act and agreed to waive loans of farmers taken up to June 2017.

The tribals were from Nashik to Mumbai and their demand was to be given land ownership rights. Fadnavis told legislative assembly 95% were tribals and have walked 180 km distance and were the people who tilled the farmlands for decades but have never owned it. The Maharashtra chief secretary will review the claims including the ineligible declared claims regarding land transfer.

In Mumbai, Azad Maidan was transformed into a sea of red as red flags were in the farmer’s hands. The famers were agitating for the Swaminathan Commission implementation recommendation for fixing support price as a minimum at one and a half times of the production cost.

A meeting was held with adivasis and farmers at Vidhan Bhawan and it was agreed by the committee to hand over to tribals the agricultural land on providing a proof of land cultivation of pre-2005. In fact, Fadnavis told the reporters that ‘We have accepted all the demands’.

Fadnavis said Rs. 34,022 crore will be announced as loan waiver in June 2017 by his government and it will directly benefit eligible farmers to around 80%. However, Fadnavis assured that a new government resolution will be issued to ascertain husband and wife, if they have individual loans. In such cases the loan will be waived up to Rs.1.5 lakh . Right now, the loan waiver cap per account is Rs. 1.5 lakh.