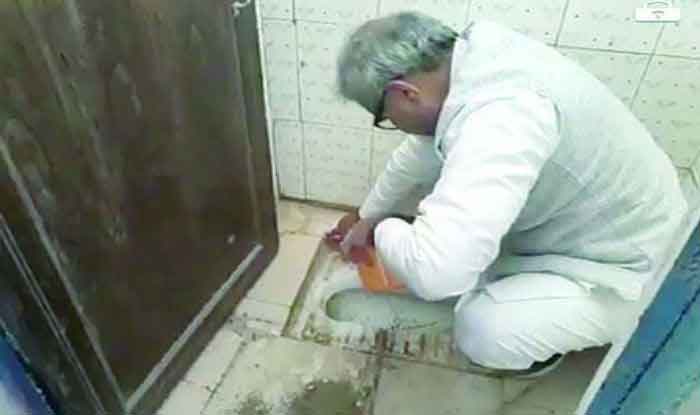 Getting hands dirty in politics is commonly understood, but this time it has been given a practical approach with BJP MP Janardan Mishra, taking it few steps ahead.

The BJP MP rolled up his sleeves and got into an enormous task of cleaning a school toilet in Rewa, Madhya Pradesh.

The video of the MP cleaning toilet with bare hands goes viral. He has not used any sanitary product or equipment to clear the clog out of the toilet. This was the toilet that was not in use as it had soil accumulation.

Many appreciate his effort and action that sets him to be a good politician. Janardan Mishra, the BJP MP was an ardent supporter of Narendra Modi, Prime Minister for his ‘Swachh Bharat’ mission and was also spotted cleaning his constituency streets in Rewa. Many people are blinded by politics and support this as it is done by their own party MP.

As a routine, the MP of Madhya Pradesh, Janardan Mishra during his visits in Khajuha village to a school in the Rewa district was informed that the toilet was not in a condition to use by the students as it was clogged. But, immediately, the MP got down to clearing the toilet that had soil despite protests in the background from a man insisting of cleaning it.

Mishra, the MP of Madhya Pradesh, visited in Bushido gram panchayat this primary school as the Swachh Bharat Mission part and the MP took the matters of cleanliness in his own hands. Recently, during his visit in Rewa to another school also he checked if the student’s nails were trimmed. This act of his is being appreciated.