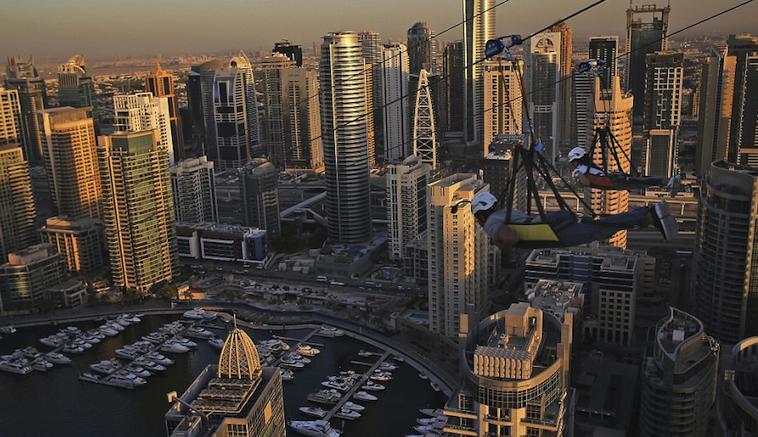 Just to take the adventure activities to an extreme level Dubai has launched the world’s fastest, longest yet steepest urban zipline. According to the XDubai’s statement, the new ziplines or the new attraction is one kilometer long and can achieve an average speed of eighty kilometers per hour. The Xdubai have established the new attraction at the Dubai Marina and it is already started catching the attraction of the adventures people. However, this is the second Xline that is added to the Dubai Marina. The first one was added in the year of 2015 and since then the XDubai heads wanted to take this to next level. Hence the invention of the longest yet fastest zipline happened.

The adventurer can easily zip himself or herself at one of the Amwaj towers in JBR and travel at 170 meters in the air and land at the terrace of Dubai Marina Mall. The adventurer will be waving over the skyscrapers and water, which will definitely offer an adventures feeling.

The Xdubai manager also added that the new attraction will be available for both i.e visitors and residents. The visitors have to wear a helmet during the xline session and there will be a GoPro mounted at the top of the camera in order to capture photos. Also, the photos will be mailed to the visitor later their session.

Also, the visitors who want to experience the Xlines needs to be at least 12 years old and the last age is 65 years. Also, they need to be in a good medical condition and visitors who are under 17 will need to get accompanied by the legal guarding.

They have also added that by using both of the ziplines continuously 16 people can enjoy the ride per hour. Also, they are hoping to see some good amount of visitors for their new attraction.

Be the first to comment on "Dubai Marina Adds World’s Longest urban zip line as an attraction."