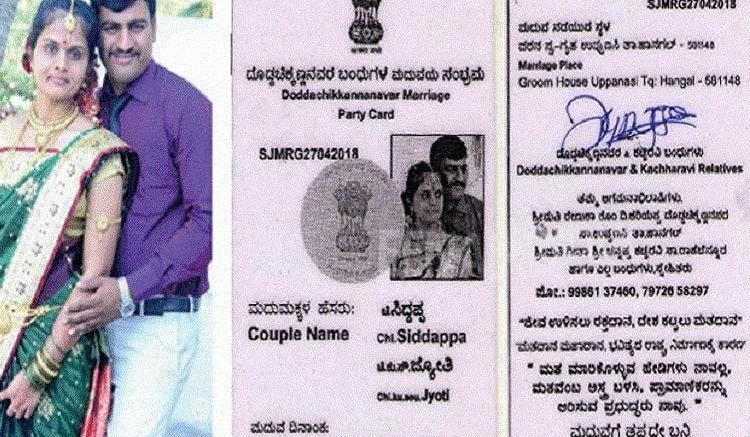 The Karnataka Assembly election is around the corner, while from Haveris district, Hangal, a couple gave their wedding invitation card an innovative twist. They have printed their wedding invitation card identical to voter identity cards. The main idea was to bring out the importance of voting and aiming to spread awareness about the value of votes.

The bridegroom Siddappa is a Hangal town resident and is working currently with the Railways in Goa. On April 27, he is getting married to Jyoti of Ranebennuru town.

This wedding invitation card has the photo of the couple same as voter id at the right corner top. Their marriage date is printed in the place of the identification number and the card message is appealing to vote responsibly as it reads ‘Your vote is valuable’.

The couple took permission to print the card in this format of the District Collector.

Siddappa and Jyothi, the couple will tie on April 27 the knot. Siddappa is working for railways in Goa and is a social activist from Haveri district. He has invited Superintendent of Police and District Deputy Commissioner for their marriage.

“I wanted to do something unique to promote Karnataka elections and so I approached my friend Karibasappa Gondi, a constable, he advised me to take this opportunity to encourage people to vote. After that, my wedding card was designed like a Voter ID including similar fonts and style,”  quoted Siddappa.

The invitation card has the photograph of the couple in passport size with marriage date and a message to motivate people to vote: –“your vote is valuable’. They printed 1200 cards and the couple was praised to take this step.

Karnataka assembly is to be held on May 12 in all its 224 constituencies. The results will be out on May 15.