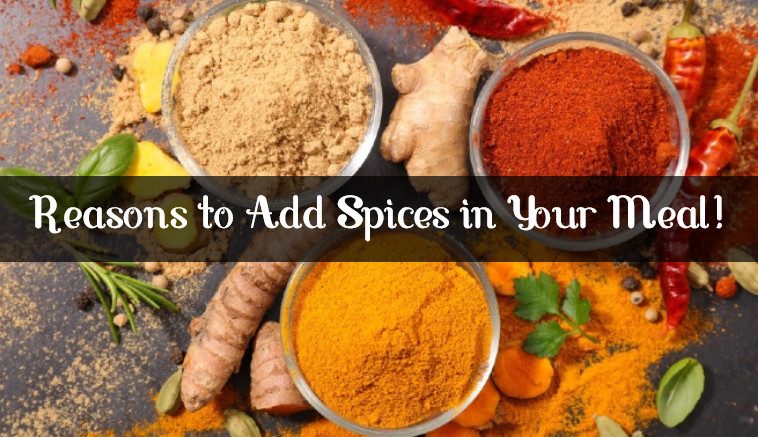 Your favorite foods just wouldn’t taste the same without their main ingredient – spices. While spices do add some much needed pep to any meal, they also come with multiple health benefits like helping you fight an infection, reducing inflammation, and even preventing cancer.

The tradition of using spices in cooking and their importance in leading a healthy life has always been a major part of global history. Whether you consider traditional medicine or culinary habits, spices were one of the most in-demand products that were traded. While spices gained popularity as flavoring agents in food, they were originally celebrated for the wide array of medicinal properties they possess.

Spices are, in fact, nothing but plant derivatives. They originate from different parts of the plant – right from the flowers, fruits, and seeds to the bark, leaves, and roots. Besides improving the way your favorite dish tastes, spices can help with preservation for a long period of time too. Most importantly, spices possess antibacterial and antiviral properties. Most spices are very rich in B vitamins and trace minerals too. If that’s not enough, you’d be surprised to know that spices also contain more disease-fighting antioxidants than fruits and vegetables.

With so many disease-fighting properties in tow, it’s no surprise that spices boast a myriad of remarkable health benefits. Here’s a list of remedial benefits of 5 popular spices that are used extensively:

This popular spice is an important part of several forms of alternative medicine. To begin with, 1 gram or more of ginger can be used to treat nausea that’s caused by morning sickness, chemotherapy, and sea sickness.

Ginger is also known to have strong anti-inflammatory properties, making it an effective remedy for pain management and to reduce muscle soreness. If you’re having issues with exercise-induced muscle pain, ginger can be used as a remedy to reduce day-to-day progression of pain.

Here are some other important benefits of ginger:

Made using the inner bark of cinnamomum trees, cinnamon is another popular spice that’s popular for its numerous health benefits. This spice is high in a compound called cinnamaldehyde, which imparts most of its powerful effects on your health and metabolism. Cinnamon is loaded with potent polyphenol antioxidants that protect your body from oxidative damage caused by free radicals.

That’s not all. Cinnamon also possesses anti-inflammatory properties and help your body fight infections and repair tissue damage. In addition, cinnamon can improve your sensitivity to insulin and lower your blood sugar levels as it is has a powerful anti-diabetic effect. You’ll be able to reduce your risk of heart disease too; all you need is cinnamon.

A plant in the Allium or onion family, garlic is a popular culinary ingredient owing to its strong smell and delicious flavor. Garlic is rich in allicin, a compound that’s responsible for its distinct smell. So, whether you chop, crush, or chew garlic cloves, this compound enters your body through your digestive tract and imparts its beneficial properties.

To begin with, garlic is very nutritious and contains calcium, copper, potassium, phosphorus, iron, vitamin B1, B6, C, fibers, and manganese. But, what makes garlic really stand out is its powerful effect against the annoying common cold by boosting the function of your immune system.

Other important health benefits of garlic include:

Cayenne peppers belong to the nightshade family of flowering plants. Originally grown in Central and South America, this popular spice is a type of chilli pepper that’s closely related to bell peppers and jalapeños. Cayenne peppers are very rich in antioxidants and contain an active ingredient called capsaicin. This capsaicin is responsible for the peppers’ hot taste and its wide array of health benefits.

For starters, this capsaicin has metabolism-boosting properties. It increases the amount of heat your body produces and makes you burn more calories in a day by a process called diet-induced thermogenesis, which causes an increase in your metabolism. Cayenne peppers can also improve your digestive health by boosting your stomach’s defense against infections. It does so by increasing digestive fluid production and helping deliver enzymes to your stomach.

Arguably the most effective nutritional supplement in existence, turmeric contains a high amount of bio-active compounds called circuminoids that give it its powerful medicinal properties. Of these compounds, curcumin is the most important one and is an active ingredient in turmeric. Curcumin has powerful anti-inflammatory effects and is a very strong antioxidant. In fact, it can inhibit many molecules known to play major roles in chronic inflammation.

As a powerful antioxidant, curcumin uses a two-pronged approach to fight against the oxidative effect of free radicals in your body. Firstly, it neutralizes free radicals due to its chemical structure. Then, it goes on to boost the activity of your body’s own antioxidant enzymes. Curcumin can also be linked to improving your brain function. One of the main drivers of this process is called Brain-Derived Neurotrophic Factor (BDNF), a type of growth hormone that functions in your brain.

Here are some other important health benefits of turmeric:

Be the first to comment on "Reasons to Add Spices in Your Meal!"