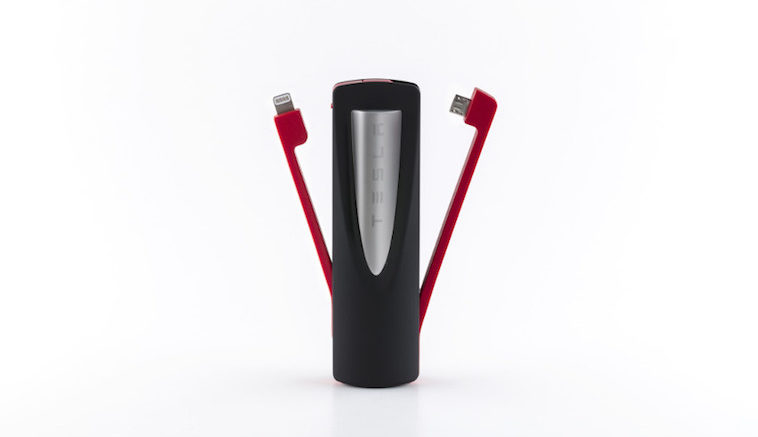 After the semi electric truck and Tesla Roadster, the company is embarking on another journey. Elon Musk is not satisfied after manufacturing the quickest product car, the Tesla Roadster and conspired something else to keep the world wonder at what else he can do.

Tesla has a cutting-edge technology to charge smartphones and desktops. Tesla has successfully launched a portable battery dubbed power bank and also a Desktop supercharge at the correct holiday shopping time. This is a brand new mobile accessory and has been added to the company’s online store which is aimed at providing an extra spoon of sugar to the mobile users.

Tesla Power bank is a single 18,650 cell battery with a capacity of 3,350 mAH. That’s roughly one charge for most of the smartphones. The output rate of the device is 5V/1.5A and it only offers micro USB, USB and Apple Lightning charging cables.

The most impressive thing of the portable charger is its battery pack design and the funky details that are surely going to excite the die-hard Tesla fans. The look of the Power Bank was inspired by the Tesla’s supercharger monument at the Tesla Design Studio, California. The design is chosen purposely may be to attract the customers in the peak shopping season.

The main features of the Power Bank are:

If the portable charger is not your cup of tea, then you can also take a look at the desktop super charger. The charger looks like a mini charging station, the only difference is it doesn’t charge your car, it charges your desktop. Tesla says that the company has used the same 3D CAD data which was used to make the actual supercharger to create the miniaturized replica.

These products are put at a cost of $45. You might find some better options for the same price in the market but these can be a must buy if you are die-hard Tesla fan.