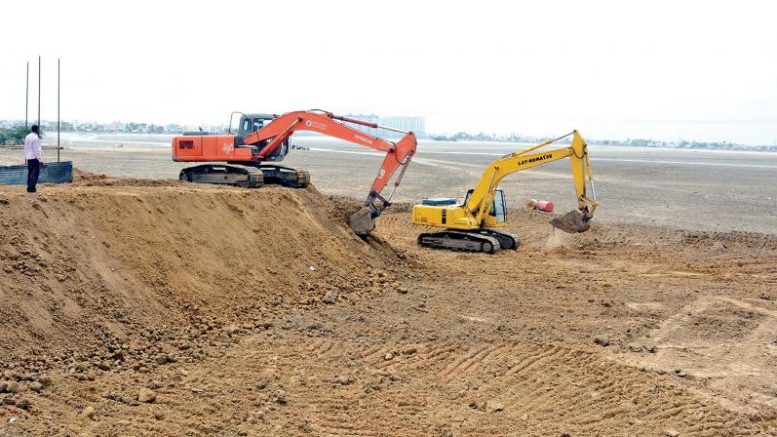 The Public Works Department (PWD) found a new way of restoration. As a part of beautification and restoration process, a good stretch of Cooum River is being filled with construction debris to flatten it. The convention says that a river is a natural drainage system and it should be kept clean to enhance the water carrying capacity. However, something is happening the other way round here, more silt is being added to it to distort natural gradient and riverine ecosystem.

When the reporters visited the place, they could find a plain road and people were seen walking on the road. Two earthmovers were standing there to close the river completely and just a small baby canal was created to pass through the flow of water.

Due to this, the height of the river is increased and people are still unsure of what the government is planning. The riverbed is now equal to the road surface. The Nolambur and Moggappair East are low-lying areas and are one of the most effected flood areas of the city. A social activist there further said that around 70 housed that were built illegally on the riverbank were razed and the construction debris was thrown into the river.

Moreover, people are in anger and are asking what the government means by river restoration by this act. River restoration would mean bringing the river back to its natural form but here something else is happening. The engineers are bringing cosmetic changes to the ecosystem that will bring counter affects to the region.

Further, the Chennai Corporation is constructing a compound wall on each side of the Cooum River and that is again a bad engineering. Converting a river into a small canal is a bad idea and one will see repercussions in the monsoon.

Be the first to comment on "Disaster in making: PWD pouring debris in Cooum to keep it clean in Chennai"