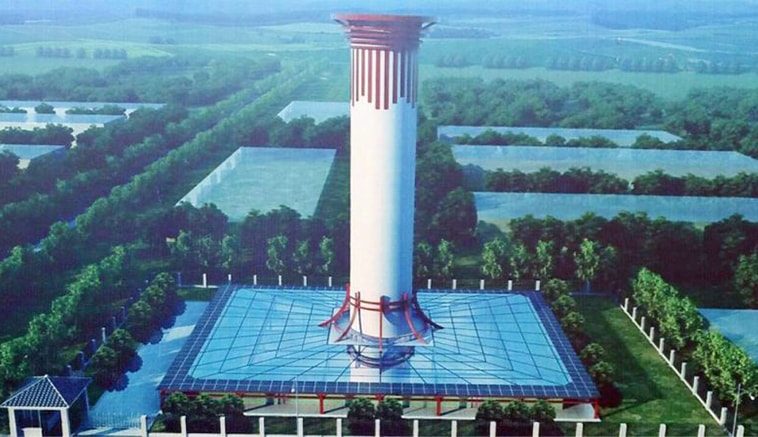 This experimental tower standing tall over 328 feet (100 metres) is in northern china.

Shocking, but true is this experimental tower standing tall over 328 feet (100 metres) in northern china. It is also known to be the biggest air purifier in the world and this has apparently brought improvement in the quality of air, says the project leading scientist. This is an attempt to tackle smog problem of the nation.This tall tower is built in Xian in the Shaanxi province. The Institute of Earth Environment researchers are testing this air purifier.

Cao, Junji, the research head, said the air quality improvements has been observed for past few months in the city covering around 10 square kilometres area. The tower has produced 10 million cubic meters a day of clean air right from the day of its launch. In fact, Cao also added that on high pollution days also the smog was reduced to moderate levels by the tower.

The system works as the polluted air is taken and heated by solar energy into the glasshouses and this hot air comes out of the tower after passing cleaning filters multiple layers. Thus Cao confirms that the results are encouraging. The concern of the Institute of Earth Environment researchers is that Xian may experience in winter heavy pollution, as the city’s heating mostly relies on coal. However, the operators in the tower say, the system is working as coatings in the cold months on the greenhouses so that the glass absorbs solar radiation at higher efficiency.

Cao’s team set up a dozen and more pollution monitoring stations to test the tower’s impact in that area. The team will release in March more detailed data with scientific assessment and overall performance of the tower. Cao said the Xian tower required very little power to run and in daylight hours it barely requires power. There is no doubt that in polluted china; the smog-removing inventions have proved helpful in clearing the air.

Several Xian people told the South China Morning Post there is difference since the tower started operating. A restaurant manager also said there was noticeable air quality improvement this winter, though she did not know about the tower and its purpose, she confirmed.